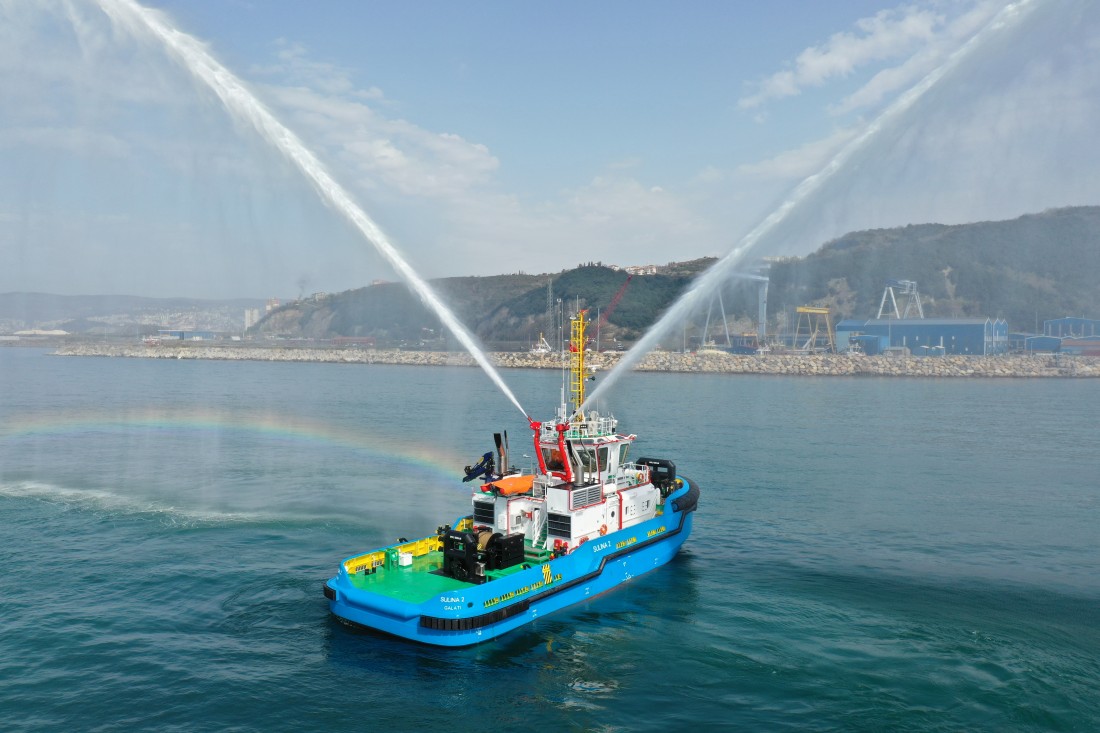 MED-A3055-ICE-SUPER class tugboat is specially built by Med Marine / Eregli Shipyard engineers according to AFDJ’s operational requirements being mainly in Danube. As part of this, the tug is prepared for IMO Tier III regulations and BV Ice Class 1A Super notation.

Sulina 2 will commence its operations in Danube River.

The tug built by Med Marine Turkey, Sulina 2 will patrol on the Danube sector, between Braila (km 175) and Sulina Bar and will contribute to the improvement of the safety and of the security of the maritime ships traffic, through the following activities:

- She will insure the flowing of the ice pieces, for avoiding formation of ice bridges, which is very dangerous for the ships and could lead to the hydrotechnical constructions.

- She will intervene to release the ships from the ice, for avoiding the risk of their sinking, which could lead to loss of the human lives, goods and present a real pollution danger of the Danube with fuel oil or with their cargo.

-  will intervene for helping the ships landed on sand banks on the river.

-  firefighting to the other ships and on shore

-  assistance and intervention to the ships in the port or anchoring area.

“We are happy to have completed the high quality tugboat and successfully delivered Sulina 2  to AFDJ to their satisfaction and appreciate their trust in Med Marine especially during these difficult times affecting all sectors on a global scale. I believe this will constitute a long term relationship between AFDJ and Med Marine.”

Administratia Fluviala a Dunarii de Jos R.A. Galati works under Government Decision no. 492/2003 as an autonomous company and it is the authority for the sailing runways on the Romanian sector of the Danube, from the entrance into the country, at km 1,075 and until its exist to the Black Sea, on Sulina Channel, in Sulina Port area and on the sailing arms of the Danube river. According to its Rules for Organisation and Working, the Administration has as object of activity to provide and maintain the minimum recommended depths by the Danube Commission of the sailing way, to build and maintain the hydrotechnical constructions for the protection of the shores, to provide the piloting for the maritime ships which sail on the maritime Danube from Sulina to Braila (km 175) and fulfilment of the other obligations assumed by the Romanian Government under the Convention regarding the sailing regime on the Danube river, signed in Belgrade on 18.08.1948 and of the bilateral agreements signed with Bulgaria and Yugoslavia. (now Serbia)

According to the Order of the Minister of the Transportation and Infrastructure no. 1668/15.11.2012, regarding the organising of the intervention against ice on the Danube river, it is established and function the Headquarters for Action against ice on the Danube river, leaded  by the General Manager of Administrația Fluvială a Dunării de Jos Galați, as chief of the Headquarters.